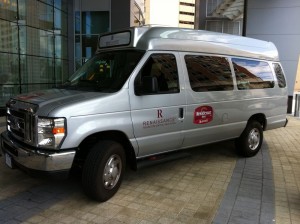 The Renaissance operates a free shuttle to and from Reagan National Airport.

Look for a silver shuttle with white lettering and Marriott, Renaissance, Residence Inn and Courtyard logo on the shuttle. There are two shuttles that come through the airport, often back-to-back. In the front windshield of each van there will be a placard stating either “South Loop” or “North Loop”. The shuttle transportation to the Renaissance Arlington Capital View is the SOUTH LOOP.

Shuttles operate 7 days a week. Shuttles FROM the hotel to the airport begin at 5:00am for the first run. The second run is at 5:30AM. Beginning at 6:00AM the shuttle will run every 20 minutes continuously throughout the day until 11:000PM. The last shuttle departing Reagan Washington National Airport to the hotel at 11:00pm.

Track the Airport Shuttle by using the following link: marriottdcairportshuttle.com